Jay Chaudhuri
Are you an incumbent?
Yes

1. Do you support the City of Raleigh’s $275 million parks bond on the ballot this November?
Yes

3. Do you support the $530.7 million Wake County schools bond on the ballot this November?
Yes

4. Do you support the use of incentives for the attraction and retention of employers?
Yes

5. Do you support the use of incentives for the attraction and retention of employers? Why or why not?
Yes. As long as other states and municipalities use incentives, I support incentives as an economic development tool. Beyond incentives, I believe the City of Raleigh possesses other assets that continue to make it one of the best cities in the world to do business, including great universities, a great community college system, and a great public school system. I believe such incentives should be tied to companies meeting specific economic goals such as employing or retaining a certain number of workers.

6. Do you support Medicaid expansion?
Yes

Do you support Medicaid expansion? Why or why not?
Yes. I believe Medicaid expansion would result in the creation of more than 40,000 jobs and cover more than a half million North Carolinians. Today, we remain only one of 12 states to still not expand Medicaid, a decision that costs us $521 million in lost federal funding every single month.

9. How will you help North Carolina to be more competitive regionally, nationally, and internationally?
In the State Senate, I advocated and supported the creation of a North Carolina trade office in India so we can attract more global companies to the region. During my time in the State Senate, I've helped recruit two global companies to the region that created good, high-paying jobs.

Transportation/Transit – Continue to promote and implement an effective transit plan to optimize service delivery and position the state for ongoing growth.
I support the development of a commuter rail line in the Triangle that would connect the west side of Durham to Garner or Clayton. Such a commuter rail line would help mitigate future traffic congestion. In addition, nearly half of the area's new jobs will be near the proposed commuter line.

Economic Strength - Create a business-friendly environment to attract, retain and grow business, diversify the economic base, and create job opportunities for all citizens.
As State Senator, I've worked to recruit two global companies to the region that created good, high-paying jobs. From that experience, I believe that investing in a world-class education system, including a world-class community college, a world-class university such as N.C. State University, and a world-class public education system, is key to attracting new companies to the region. It's critical that we carry out the spirit of the Research Triangle Park where business, university, and government all work together.

Affordable Housing – Develop an effective affordable housing plan through collaboration with the government, the private sector, the community, and individuals.
I'm reminded of the gentrification in our city when I drop my daughter off to high school every day. Our General Assembly can play a key role: That's why I've sponsored legislation to double our affordable housing budget, and that's why I've sponsored homestead exemption legislation to reduce or freeze property taxes for long-term eligible homeowners to promote neighborhood stability and preserve character.

Great Government - Promote a vision of a city government that partners with all levels of government to empower, protect and serve its citizens through a culture of respect, collaboration, and innovation
As State Senator, I communicate routinely with members of the Raleigh City Council, Wake County Board of Education, and Wake County Commissioners. My office remains open for any constituent to come and meet with me. The constituent is welcome to discuss and disagree with me on any issue. I'm open to any new ideas, too.

Growth and Sustainability - Establish a deliberate and realistic approach to address growth and mobility while preserving our environment and healthy communities.
I support our state's new clean energy legislation that does a number of things. First, it directs the Utilities Commission to take reasonable steps to reduce carbon emissions from the electric sector 70 percent by 2030 and 100 percent by 2050. Second, the bill requires utility companies to buy 45 percent of their solar power from smaller solar producers. Finally, the bill requires some coal-fired power plans to be retired.

In addition, I've co-sponsored the Fund Our Police Act that would appropriate funds to the Department of Public Safety to provide local law enforcement officers with a one-time appreciation and retention bonus for service during the pandemic.

Social and Economic Vitality - Improve economic and social opportunities in vulnerable communities through strategic partnerships.
I support building an inclusive economy that also focuses on intergenerational poverty. For us to do so, we need to invest more in early childcare and education (see response above), expand and strengthen support for first-generation and other low-socioeconomic students, expand affordable housing in the city (see response above), and improve the support of mental health services.
Invest in Your Future
Chamber membership means more contacts, sales, and growth for your business. Learn more! 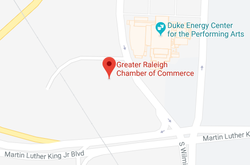